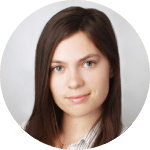 KASIA is a Spanish philologist and an architect, passionate about languages. She is fascinated by many features an processes of languages: how they develop, how people learn a language and use it to express themselves, how the culture and language influence each other, so she enjoys comparing languages to discover similarities and differences between them. She is mastering her Polish, Spanish and English, also she would like to level up her Portuguese and French and to learn some new languages.